Tunku Abdul Rahman Park is a state park located in Gaya Bay, 3 kilometers offshore from Kota Kinabalu. Named after Malaysia’s first Prime Minister, Tunku Abdul Rahman, it was gazetted in 1974 as Sabah’s second national park. The Park covers an area of 50 sq kilometers comprising 5 islands, their surrounding reefs, and sea. Its main objective is to protect their fauna, flora, and marine eco-systems. Geologically, the islands are part of the Crocker Range but became isolated from the massif when sea levels rose after the last ice age.

The names of the islands are symbolic of their history and early discoverers. Pulau Gaya (‘big’), Manukan (‘fish’), Mamutik (‘for shell collection’), Sapi (the sound of a mowing buffalo), and Sulug (commemorating the ancestry of the Sulu peoples of Sabah). Initially, the Park covered two islands - Gaya and Sapi. In 1979, the Park’s boundaries expanded to include three other islands : Manukan, Sulug, and Mamutik.

The administrative centre of the Tunku Abdul Rahman Park is in the Manukan island, however each of the five islands had its own administrative offices. 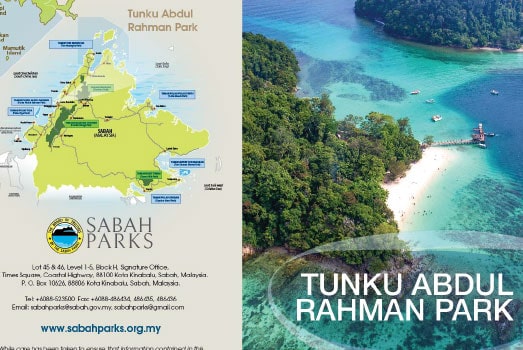 Pulau Gaya
At 15 square kilometres, Pulau Gaya is the largest of the five islands. On its eastern corner is a village which lies outside the park. From a height of 300 metres in the centre, the land slopes down to secluded bays and sandy beaches. Gaya's popular Police Beach fringes the large semi circular Bulijong Bay in the north. Coral reefs surround the forested island and is ideal for snorkelling and diving. There are 20 km of marked trails including a plank-walk across a mangrove swamp.

Pulau Manukan
Pulau Manukan is the Park's second largest island and the most developed. Shaped like a crescent, it is one and a half kilometres long and a third of a kilometre wide in the middle. The best beach is on the eastern tip of the island and has good snorkelling to the south and east. The Sabah Parks Headquarters are located on Pulau Manukan. Nature trails are available for those who want to explore the island.

Pulau Mamutik
The smallest island, Mamutik is also nearest to the mainland. Easy access makes the roughly triangular island very popular. Rocks line one side while sandy beaches fringe the others.

Pulau Sulug
Sulug is the furthest from the mainland. It's a rocky island less than 200 metres across. A long sand spit facing east drops sharply near an extensive coral reef. Remoteness makes Sulug a favoured swimming spot.

Pulau Sapi
Just 200 metres wide and half a kilometre long, Sapi is one of the more popular islands with 5 kilometres of nature trails. A sand bank links it to Gaya. At low tide, it's possible to wade between the two islands.