Tun Sakaran Marine Park (TSMP) are situated at the entrance to Darvel Bay, off the East coast of Sabah near the town of Semporna, it took about 45 minutes by speed boat from the jetty of this small town. Named after then the Head of State of Sabah, Tun Sakaran Dandai, it was gazetted in July 2004 as Sabah’s seventh park. The Park is the largest Marine Park and covering 340 sq kilometers of sea and corals reef and 10 sq kilometers of land.

Comprising 8 islands, their surrounding reefs, and sea. Its main objective is to protect their environment and to promote sustainable use of natural resources. Geologically, the islands are formed from Quaternary pyroclastic material, which was ejected during explosive volcanic activity. Pulau Bodgaya, Boheydulang, Tetagan, Selakan, Sebangkat, Maiga, Sibuan and Mantabuan.


TSMP is one favourite spot for divers. Rich marine life may be found when diving in this park area. There is also hills which attracts for rock climbing activity. From scientific study carried out by Dr.Elizabeth Wood for over 20 years , found that the richness of marine life in TMTS is standing on par with the marine life of ‘Great Barrier Reefs' in Australia.

The Bajau Laut (Sea Gypsies) lived a nomad lifestyle on boats adding to the uniqueness of the Park. 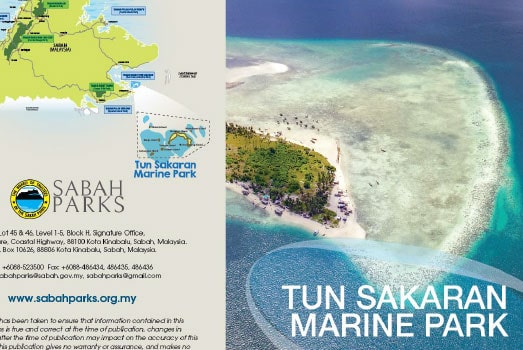 Listed below are the updated conservation fees. 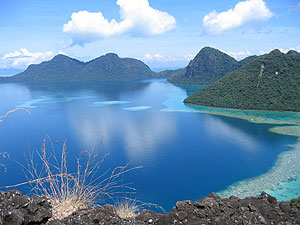 This is another high island formed from volcanic rocks, and has an area of 313 hectares. It is separated from Bodgaya by shallow channel. The ground slopes upwards from the shore, in some places very steeply. There is a ridge running along the length of the island and has three separate peaks. The Boheydulang Peak is the highest (353m). There are a number of rock pools on the east side linked by a stream. The pools are 2-3m across and some are fed by small waterfalls. Other streams form if there is heavy rain. 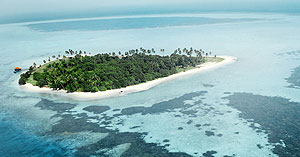 Mantabuan is located about 2.5km from the north coast of Bodgaya, at the southwestern corner of the Mantabuan reef. It is the smallest island in the Tun Sakaran Marine Park, with an area of 10.08ha. The island is flat with a sandy beach running all the way round. The ground in the corner of the island is hard and compacted. 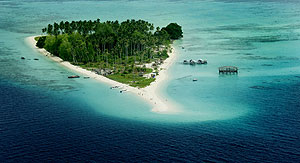 Sibuan is located at the southwest corner of a reef stands alone to the northwest of Bodgaya. It covers an area of 15.13 hectares. The island is a sandy cay that has probably built-up entirely from the eroded remains of the adjacent coral reef. It has an elevation above sea level of about 1-2m. Limestone beach rock has formed in several places, particularly at the northern end of the island. There are separate outcrops at various levels on the beach. 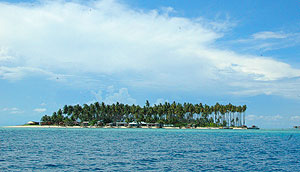 Located north of Pulau Selakan, it covers an area of 20.16 hectares. Maiga is low, sandy island, rather than a raised limestone platform. However, it appears to be linked to the Sebangkat-Selakan formation, and presumably there may be volcanic rock many metres beow the surface, with a crap of pld reef limestone on top. There is a sandy beach running right round the island and deeper water fairly close to the shore. Erosion is occurring along the eastern side, especially in the south where the sand and soil at the back of the beach is cut away to a height of about 0.5m. There is sand and spit at the southern end of the island, and it is possible that the island is slowing growing in this direction.

The island is located on the southeast corner of the Sebangkat-Selakan reef complex. It covers an area of 32 hectares. The island consist of coral limestone, raised a few metres above sea level. The limestone bed has been eroded and undercut to form a rocky shoreline around much of the island. There are small stretches of sandy beach around the village, and also at north end of the island. Patches of mangrove occur along the northwest coast.

Sebangkat is located on the southwest corner of the Sebangkat-?Selakan reef complex. It covers an area of 51 hectares. There are two tiny islets of reef limestone to the north of Sebangkat, in the middle of the reef top plateau. The island consists of coral limestone, raised a few metres above sea level. The limestone bed has been eroded and undercut to form a rocky shoreline around much of the island. There is a good sandy beach at the southwest corner of the island and stretches for some distance along the south coast.

This island is separated from Bodgaya by a shallow channel and has an area 30.24 ha. It is considerably lower that other two islands, with maximum elevation of about 80m. The slopes rise fairly steeply and in places rock are exposed. The shoreline is rocky in many places, with naarow beach along the northwest side. This extends into a sand spit at the northern tip of the island.

At 8km long and 1.5km wide, Pulau Bodgaya covering an area of 796.4 ha is the largest of the eight islands. This is a high island formed from volcanic rocks. The ground slopes steeply upwards from the shore, leaving a narrow, wave-cut shingle terrace. The main rock outcrops have steep slopes which begin at elevations of between 1100m above sea level and have average inclination of 45-60°. Mt. Bodgaya (one of two peaks) reaches a height of 455m at the western 'arm' of the island, while another peaks at the eastern 'arm' reaches a height of 366m. The two 'arm' are separated by a valley, which cuts through from the north to the south side of the island.

The sheltered slopes and valleys have the richest vegetation and tallest trees. Mangrove is well established along much of the coastal fringe. At the north side, a number of freshwater stream flows on the island.