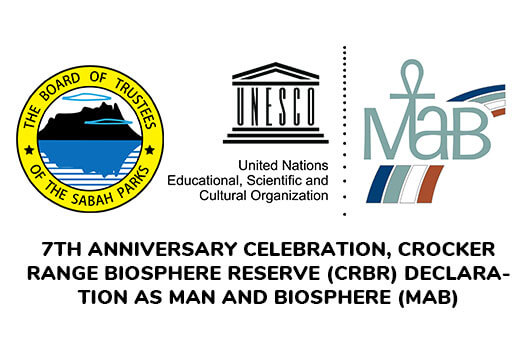 On 12 June 2014, the 350,584-hectare Crocker Range Park and its surrounding area were declared as ‘Crocker Range Biosphere Reserve’ (CRBR) under the Man and Biosphere (MAB) program by the United Nations Educational, Scientific and Cultural Organization (UNESCO). CRBR is the second Biosphere Reserve site in Malaysia after Tasik Chini, Pahang. The CRBR initiative is one of the initiatives of the Sabah State Government, Malaysia to contribute in global efforts to address economic issues, education, scientific research, cultural science, and recreation of the world's population.

Among the main objectives of CRBR are:
I. To prevent the degradation of biodiversity and traditions of indigenous communities.
II. To enable the sharing and exchange of scientific expertise, information, and promotion in sustainable development.
III. As an education and research site.

In conjunction with the 7th anniversary of the Crocker Range Biosphere Reserve, Sabah Parks under the Ministry of Tourism, Culture and Environment is pleased to announce to the public that there will be a webinar on July 7, 2021. In this webinar, there will be three briefings presented by UNESCO Jakarta, UNESCO National Commission Malaysia (SKUM) and Sabah Parks related with MAB.